The mock draft tool at first glance may be a bit daunting so this section should help clear up some of the drafting functionality and what certain things do.Your screen will differ slightly depending if you are drafting on mobile or desktop PC, so I am going to include both screenshots so you can follow along easier. 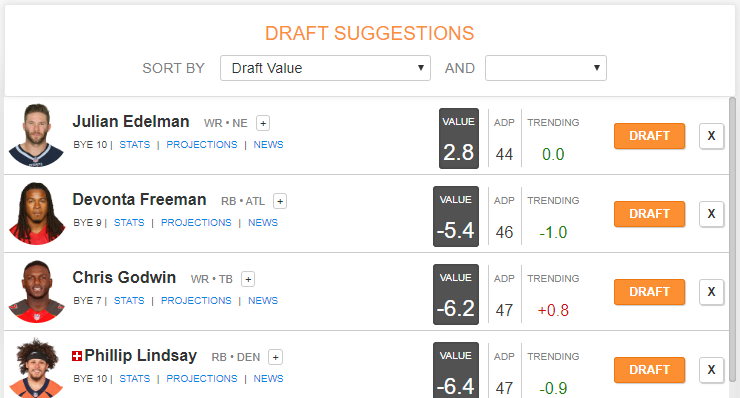 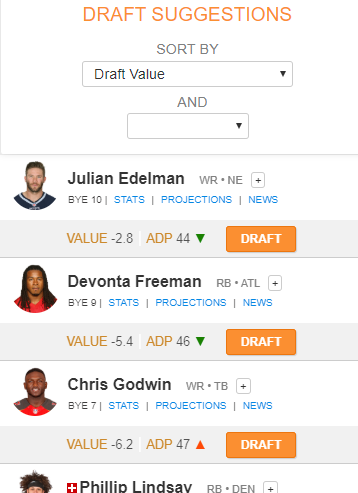 A quick look at the Draft Suggestions screen shows you the most important information when drafting a player. This includes their stats from the past season, their projection for the upcoming season, and their latest news. We also include their draft Value, ADP, and trending ADP number.Clicking the orange draft button will draft the player. Pressing the [X} icon to the right will allow you to ignore the player from the draft. (only available on desktop)

What is the Value number?

The Value number indicates how far above or below this player's ADP is compared to the current pick. The higher the number, the better the value. These numbers can be positive or negative, but when drafting properly the negative numbers should not be too large.By default, the draft suggestions are sorted by value.

What is the Trending number?

The trending number indicates the player's ADP and compares it to the past week. A negative number means his ADP is decreasing (good), versus a positive ADP (bad). If you click on this number you can see the player's daily ADP graph across the entire draft season.The graph is especially useful when deciding between two players. It's always best to go with the player who is decreasing in ADP rather than a guy who is being taken later in drafts.

What is the Plus Icon?

The plus icon adds a player to the Watchlist. You can find the watchlist further down the page when scrolling

Why is Sorting useful?

Sorting by specific positions and/or categories can be extremely useful when drafting. This is especially true for those of you in rotisserie based fantasy leagues for the NBA, NHL, and MLB. For example, during the draft you can look for Point Guards with the highest projected assists per game. Or perhaps you want the best available Forward with the highest rebounds per game.

Was this article helpful?