The Draft Genius is one of our most popular and powerful tools that is designed to help you during your next draft. It is easy to use for a newbie and feature rich so a 10+ year fantasy veteran will get great value out of it.The Genius serves five primary goals. To make drafting easier and less stressful, no matter your skill level.Projecting performance of your team easy and straightforward during the draft.Easily let you compare your team against the rest of the league using our Projections.Easily allow you to research players during the draft.Ensure you get the most value out of every draft pick.Now that you see what our goals our, let's talk about how it works. The example I will be using is for baseball, but the same logic applies to any sport. 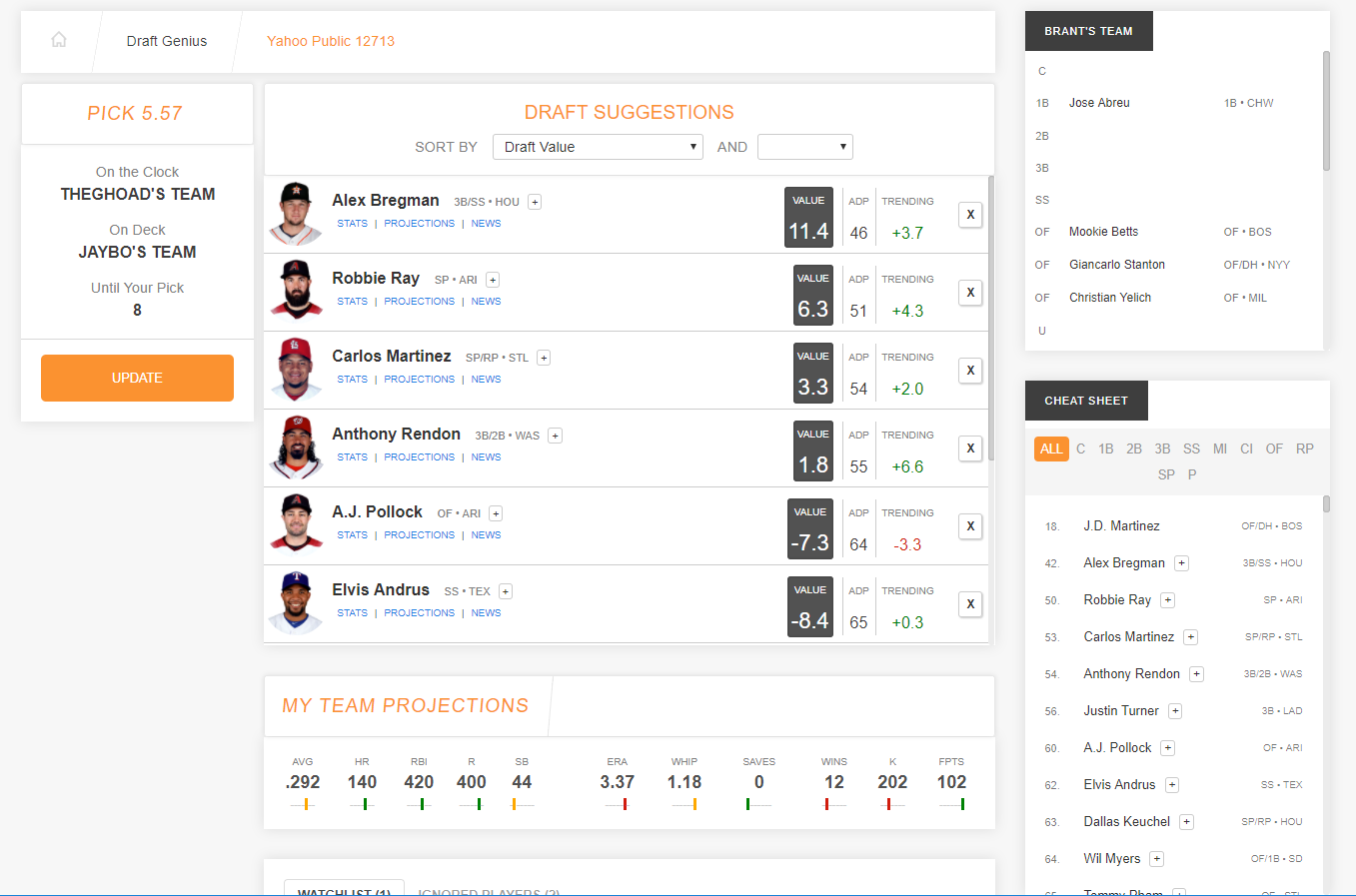 How the Draft Genius WorksYou can refresh your draft by clicking on the UPDATE button in the PICK box.By default, the draft genius will sort Draft Suggestions by Draft Value and this is what we recommend for an easy draft. Draft Value numbers can be positive or negative. The higher the number, the better value of the pick. If a number turns negative, then you are likely taking him too high in the draft.During the first round of the draft, players could be negative and that is perfectly normal because there is not much wiggle room in terms of the top 12 in most drafts. The value starts to appear in the 2nd round.In this particular example, it shows Alex Bregman as having the most value with Robbie Ray coming in second. Both players would be good value picks for pick #57. This would be a great pick since I do not currently have a shortstop or third baseman on my team. However, if you decided to grab Robbie Ray because you have yet to select a pitcher, then that would be just fine as well.Trending DataNext to each player will be their Trending data. This indicates whether or not the player is rising and falling in drafts. This is EXTREMELY important to consider. If a player is rising or falling then you should be clicking on the player name and scanning through his news to find out what is happening with that player. It could be an injury, it could be a suspension, or he could be on the cusp of losing his job. On the flipside, it could be a player who recently took over in the starting rotation or will be the lead running back due to injury.This feature is something that most draft tools do not have and it could make or break your draft. You can also click on the number to see the player's complete pick history during draft season. 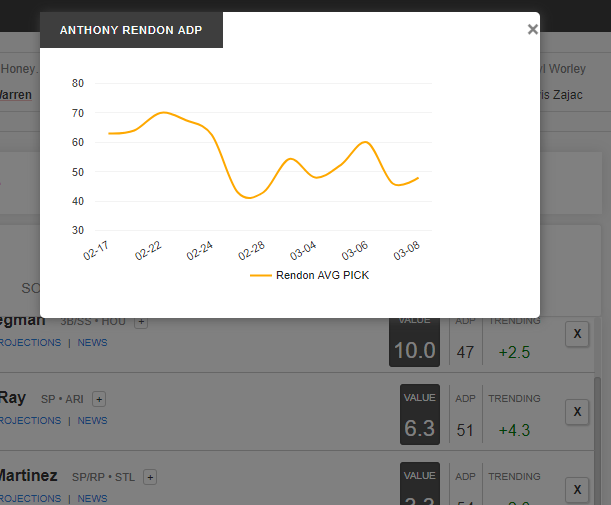 More Advanced Drafting TechniquesLet's say it's later in the draft and you are specifically looking for a starting pitcher. You can sort by starting pitcher by clicking on the Draft Value Dropdown.

But let's go a step further. Let's say that isn't enough. Let's say you can see from the Team Projections that your projected to have a bad outlook in the strikeout category. If you look above at the first picture in this page, that category is in the red and certainly needs improvement compared to the rest of the league. The line graph underneath the category indicates we are at the backend of the league.So let's sort by starting pitchers who are projected to have the most strikeouts.

The same type of drafting techniques can apply to any sport.Scoring SettingsDuring the sync process, our site will automatically import your scoring settings and draft information. Those of you in category based leagues and point based leagues will get tailored draft data that will most closely match your league.Those of you in PPR leagues for fantasy football will also get tailored draft data.

Was this article helpful?